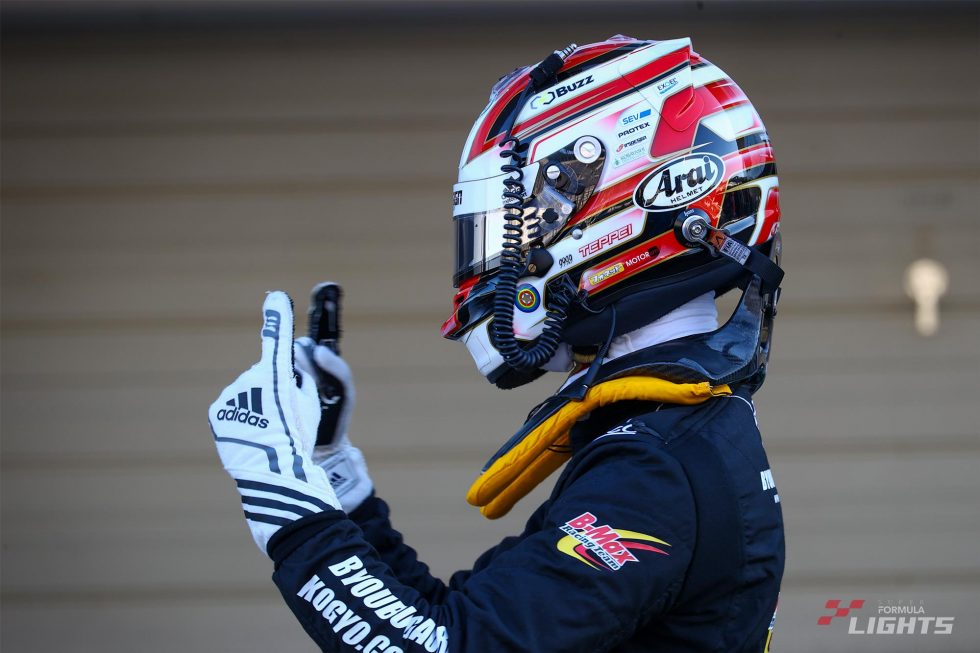 The formation lap of Buzz presents Japanese Super Formula Lights championship Rd 6 was started at 4:35 pm on Sunday as the sun began to set, and claiming the pole position on the grid determined by the finishing order of Rd 4 was Teppei Natori driving Byoubugaura B-Max Racing 320, who had made it back-to-back wins this Suzuka weekend.

Another front row sitter was Giuliano Alesi (in Deloitte. TOM’S 320) who had just completed the Super Formula Rd 2.

Nobuhiro Imada was able to start the race from eighth after repairs to his JMS RACING with B-MAX damaged from the clash in Rd 5. 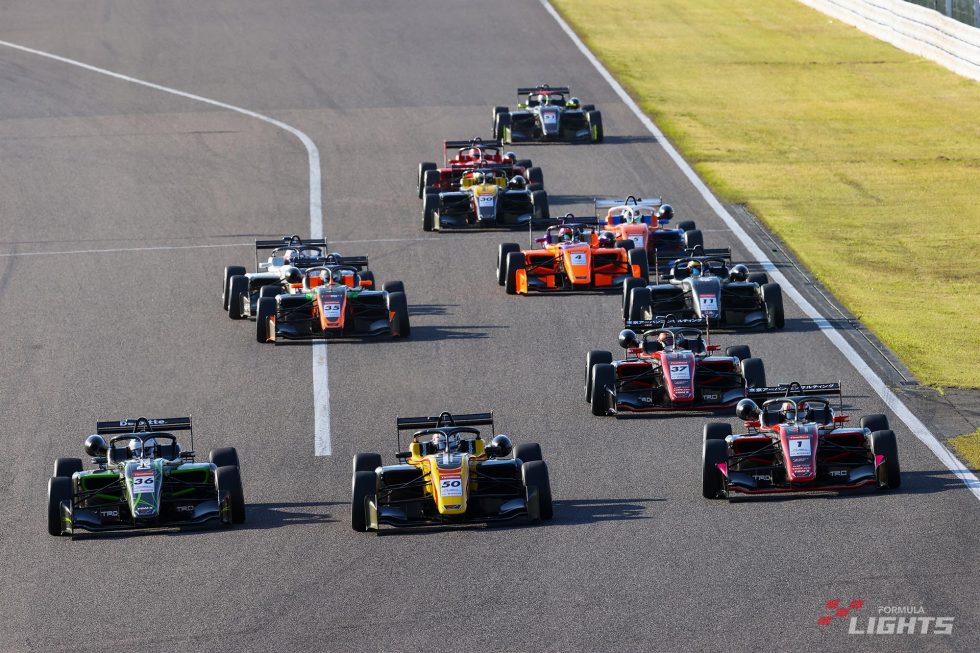 ■Natori retains his lead after a skirmish at the first corner

Natori who had got a good start to take a lead unopposed in the last two races had to defend the position this time from fellow front-row starter as Alesi went almost side-by-side into the first corner, where he managed to retain the lead after a skirmish.
Hibiki Taira (Kuo Corolla Chukyo TOM’S F320) running fourth got ahead of Nonaka at the spoon curve on the opening lap for third place, and then mounted a charge on Alesi to put his fresh tyres to good use, but fell short of overtaking.

Having started from sixth Shunsuke Kohno (RS FINE K&N 320) passed Nonaka 130R on the first lap for fourth place, leaving the TOM’S driver to deal with Miyake rapidly recovering from a poor getaway and Ren Sato (TODA FIGHTEX) – who was forced to start from the back of the grid after the contact in Rd 4.

The scrap over fifth was temporarily settled when Miyake fought Sato off with a better acceleration at the chicane on lap five and then overtook Nonaka at Turn two a lap later, who would allow Sato as well to get past him at the Hitachi Astemo chicane for sixth place.

The halfway stage saw Taira closely tail Alesi led by Natori by about a two-second gap, and both Miyake and Sato follow the lead three. 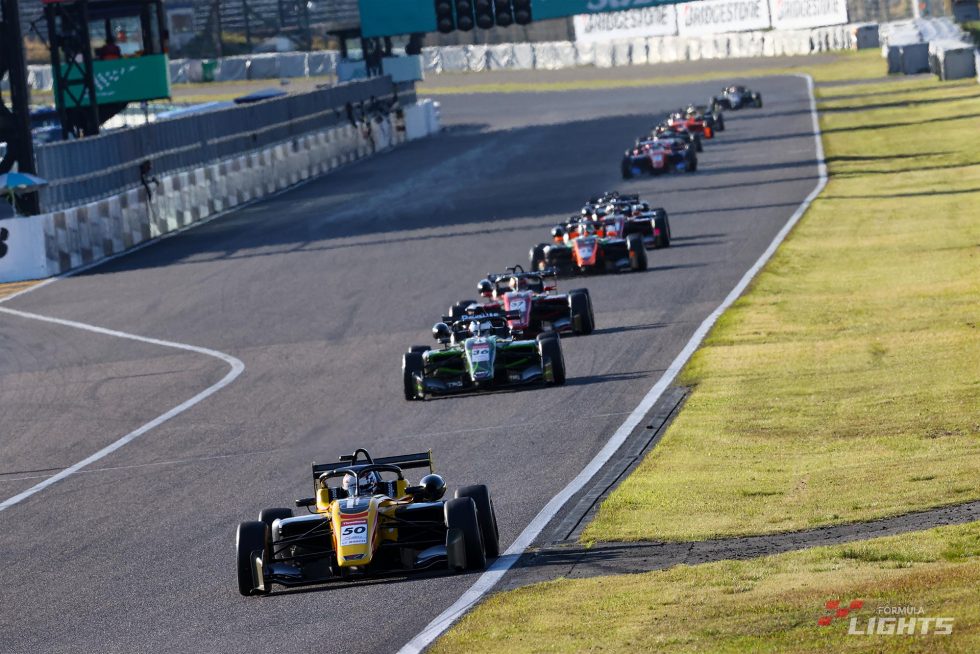 The scrap over the final points heated up just past the halfway point, with Miyake and Sato getting onto the tail of Kohno on lap seven to set up a three-way scrap.

Miyake got by Kohno on the straights on lap 10 who would also be passed by Sato on lap 12.

From here, Sato set about giving chase to Miyake, while trading fastest laps with the leading Natori before setting the fastest lap of the race on lap 14 with 1m53.221.
With the main focus in the closing stages put on the battle between Sato and Miyake as well as the lead two Natori took the chequered flag from Alesi with 1.543 secs lead to wrap up the Suzuka weekend with a third consecutive win.

Taira picked up his first SFL podium finish in third.

The tense battle between Miyake and Sato came down to the final lap, and Miyake held on for fourth place.

Sato showed an impressive recovery from the start from the back of the grid to take fifth ahead of Kohno.

Imada won in the master class by completing the race in 10th with a solid showing as Masayuki Ueda (MAXRACIING RN320) was hit with a penalty for an infringement at the start, and Takashi Hata (A-NeKT with B-MAX 320) retired after going off the track at the hairpin on lap five. 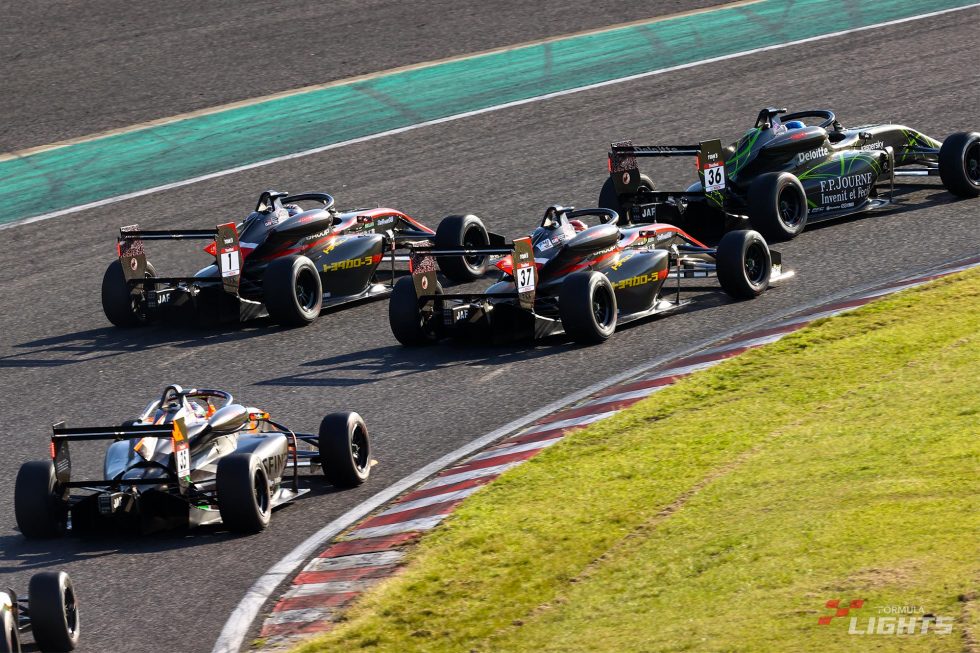