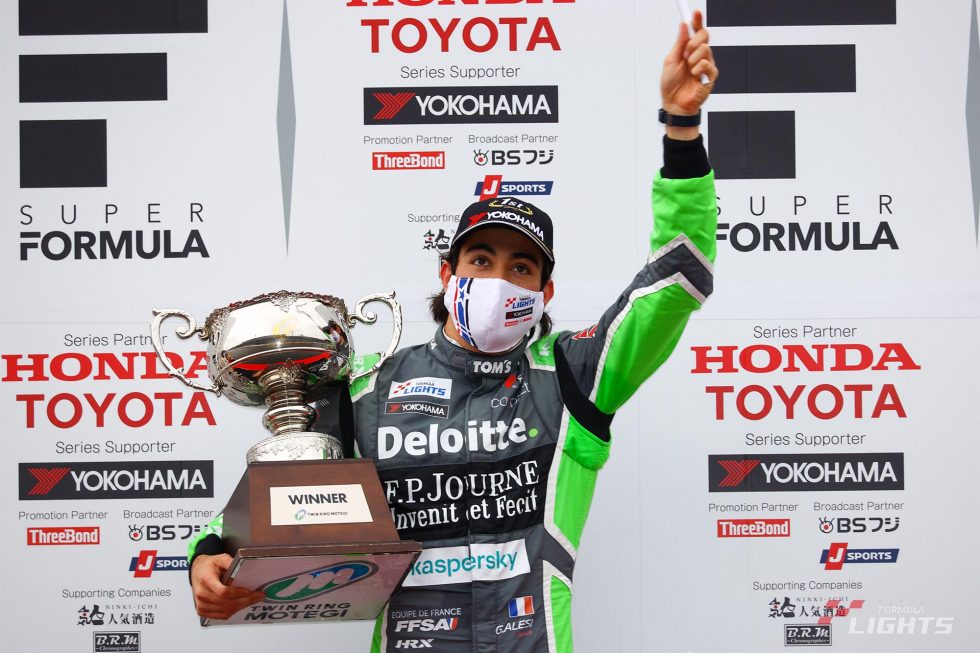 With the excitement of the morning’s fierce battles still lingering the final round of 2021 Buzz presents Japanese Super Formula championship kicked off with the formation lap at 0:55 pm still in the heavy rain.

Giuliano Alesi put his Deloitte. TOM’S 320 in pole position on the grid decided according to the finishing order of Rd. 15, with Ren Sato (TODA FIGHTEX) in second and Atsushi Miyake (MAX RACING 320) in third. 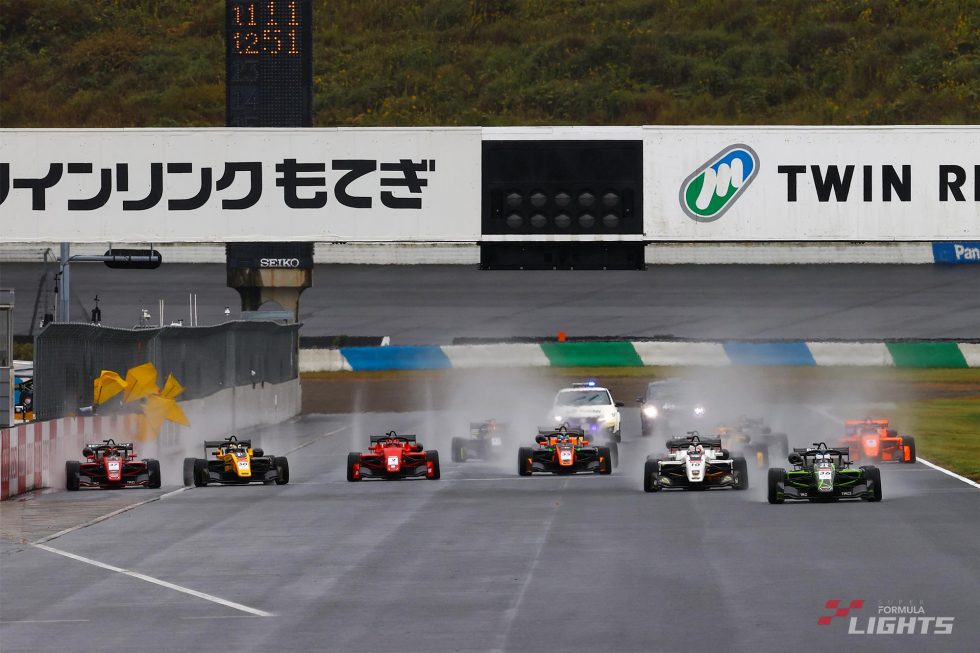 ■A flurry of “offs” from race leaders

With the rain easing off and the skies gradually clearing up in the direction of the first corner Alesi got a stunning getaway from pole for 20 laps, a stark contrast to the one in Rd 16, while Sato was not able to quickly get off the line, delaying Nonaka behind.

Despite the rain starting to let up the early stages saw a flurry of “offs”.

On lap two Natori tripped to gravel under braking for Turn five and slipped down the order having recovered to sixth place.
Though Sato had clambered his way up to sixth behind Kohno on lap four he went off at the hairpin, leaving himself playing catch up again.

The race leader was also troubled by the slippery track surface as Alesi was not able to sufficiently slow down under braking for the V-shape turn on lap five, sliding off the track in to the gravel. However, he managed to return his car on to the track right in front of Miyake in second.

The series of slips and trips bunched up the leading pack, but Alesi wasted no time in proceeding to build a lead again, “at a too fast pace” as Miyake later recalled, leaving Miyake under pressure from a charging Kotaka, while behind the three a three-way scrap with Taira leading Kohno and Sato was played.

Sato was the most energetic in the leading pack, shooting past Kohno at Turn five on lap 13, and then closing in on Taira before diving down the Taira’s inside in to the first corner on lap 16 to snatch the fourth spot. 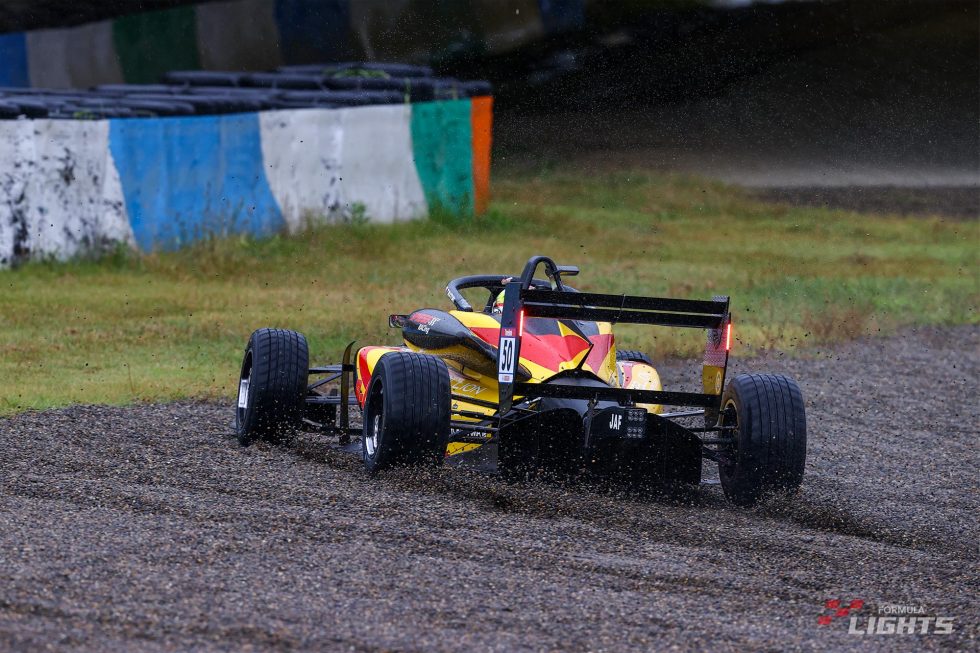 As the rain had stopped falling and the track rapidly dried Alesi set the fastest lap of the race with a time of 1m56.823 on lap 16 and took the chequered flag with a huge lead of 19.499 secs over Miyake for his fourth win of the season.

Miyake won a close battle with Kotaka to place second 0.940 secs clear of the pursuer, the results delivering the two a total of two podiums each in 2021.

Nobuhiro Imada (JMS RACING with B-MAX) took the master class lead at the start and fought it out with Masayuki Ueda (MAXRACING RN320), the winner of Rd 16 with 3.585 secs advantage at the line, concluding the 2021 season with 12 victories. 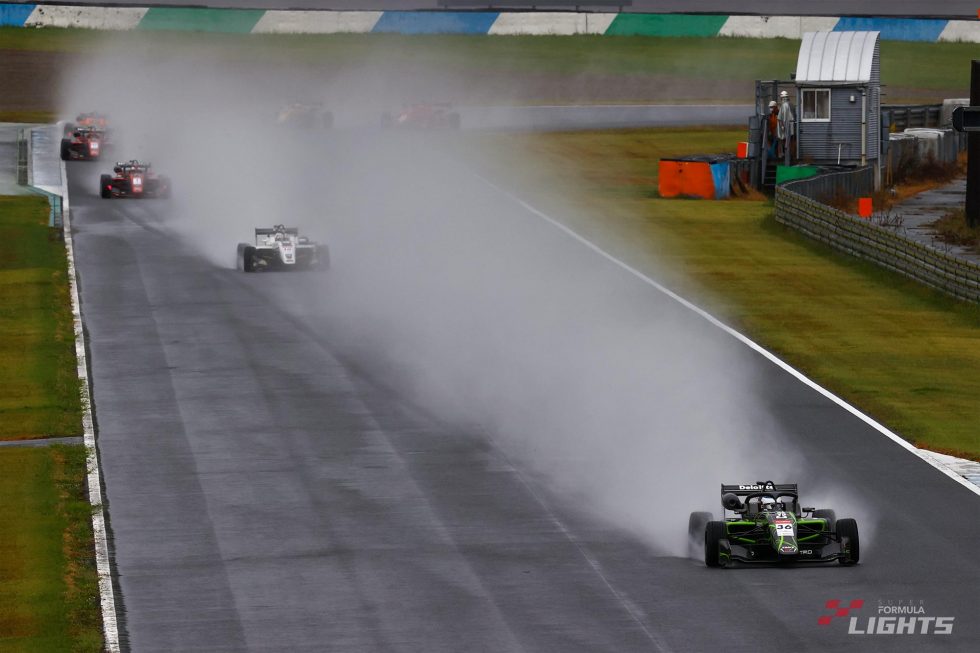